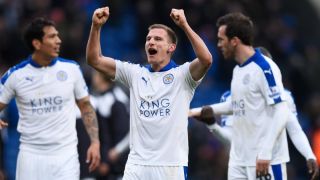 Leicester City's remarkable season will be worthless without winning the Premier League, according to midfielder Mark Albrighton.

Albrighton and Co. are six games away from hoisting the Premier League trophy aloft, with Leicester seven points clear atop the table.

Leicester's table-topping run comes a year after they pulled off the great escape to avoid relegation last season, having been seven points adrift of safety at the foot of the table 12 months ago.

But Albrighton warned this season will mean nothing unless they claim silverware in May.

"It has been going on so long that we keep saying a year ago today," he said.

"Where we were to this, it is a massive transformation. We will never get away from that fact.

"But we have got to concentrate on where we are now. Although it is fantastic it will be worth nothing if we don't see it out."

Albrighton added: "There was a lot more pressure last season but I haven't felt any pressure this season.

"I can't see why there is any on us. We are in a position no one expected us to be in.

"If we don't go on and achieve something now then don't get me wrong, we would be disappointed.

"We are aiming for the top and if we can achieve that then fantastic but if we don't then it is not a massive loss."