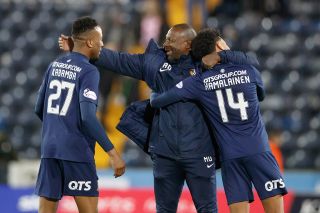 Kilmarnock boss Alex Dyer feels players should take the knee in support of the Black Lives Matter campaign “for as long as it takes to get the message out there”.

The Scottish Professional Football League announced on Tuesday that players will be given the chance to take a knee before kick-off when the new Scottish Premiership season gets under way this weekend.

In partnership with PFA Scotland and Show Racism the Red Card, the SPFL said players will also wear special t-shirts on the opening day to promote Scotland’s anti-racism charity.

When asked how long players should take a knee for, Dyer said: “As long as it takes to get the message out there.

“It’s a choice as well by the way, I’m not saying everyone has to do it.

“We like to see that people are responsive to it and if they take it on board, but if they don’t, fair enough. It’s not a major issue, everyone has a choice.”

Dyer, whose side play at Hibernian in their opening game, signed a two-year deal in June to become Kilmarnock’s permanent manager.

The former Blackpool, Oxford and Charlton defender had taken caretaker charge in December when Angelo Alessio was sacked.

Eight new players have arrived at Rugby Park since Dyer led Killie to an eighth-placed finish last season, the latest of whom is goalkeeper Jake Eastwood.

The 23-year-old Sheffield United goalkeeper will join on a six-month deal, subject to Scottish FA approval, having played for Sky Bet League Two Scunthorpe in the first half of the 2019-20 season.

Eastwood told the club’s official website: “I’m really looking forward to joining Kilmarnock and when the manager called me, I was really excited about this opportunity.

“This is a big season for me and I want to show the supporters exactly what I can do.”

Dyer said: “Jake is an excellent young goalkeeper who came to our attention through our scouting network.

“I know the goalkeeping coach at Sheffield United and he gave Jake a strong recommendation and we believe he can really develop his career with us at Killmarnock,

Dyer added: “We also want to bring in (players) for another couple of positions, I don’t really want to say, but we’ll be bringing in one or two others.”

This summer, 15 players who had been in Dyer’s first-team squad have either moved on or returned to their parent club.

Dyer added: “My aim is to stay in this league. I know it’s a bit boring, but it’s the honest truth.

“We’ve seen what happened to Hearts and no one wants to be in that predicament.”