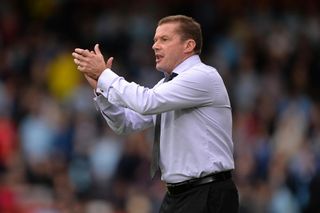 Westley has left the job following Saturday’s 1-0 home defeat to Salford – a sixth straight league loss which leaves Boro seven points adrift at the bottom of the table.

Former Stevenage player Revell will take charge of first-team affairs for the remaining 12 games of the season, having previously been part of the coaching set-up. Mark Sampson will continue as first-team coach, with Ronnie Henry also assisting.

“We are uncomfortable making yet another change as Graham has worked tirelessly for the club since the day he arrived, setting up procedures and bringing some good quality new faces in, but with six straight defeats and one win in 13 league games, we are running out of time and we have to try something new,” said Stevenage chairman Phil Wallace on the club website.

“Alex knows the squad, knows the players’ strengths and weaknesses and we are hoping his energy, dedication and enthusiasm will rub off on the lads and bring us the wins we need to survive.

“It’s a reversal of the management team we had in place before Graham came, but Revs has done brilliantly and deserves his chance.”

Revell, 36, retired from playing last season. He coached Boro’s under-18 side before making the step up to the first team in September. His first game in charge will be away at Crawley on February 22.