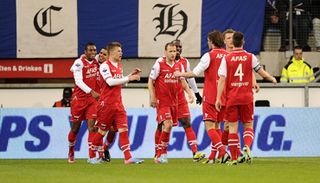 It was Alkmaar's fourth Dutch Cup triumph and their first since 1982.

Maher dribbled past three PSV players before putting his team in front after 12 minutes.

PSV pulled one back 14 minutes before the break when Wilfred Bouma headed a cross back to the near post and teenager Jurgen Locadia scored from close range.

Dries Mertens almost equalised early in the second half when his shot from a tight angle hit the side-netting and Jeremain Lens struck the post for PSV with two minutes remaining.

"Today we played with so much guts and this is what you get when you put your body on the line," said Altidore after coach Gert Jan Verbeek picked up the first trophy of his career.

PSV are second in the league, four points behind champions Ajax Amsterdam with one match to go, while Alkmaar are 10th.