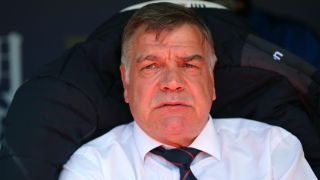 Sam Allardyce has described the agony of losing his dream job as England manager after he was embroiled in a damning video last year.

What started out as joy quickly turned to despair for Allardyce, whose 67-day tenure was abruptly ended by mutual termination in September following alleged remarks he made in a video recorded by undercover reporters offering advice on how to circumvent rules on transfers.

The Daily Telegraph published footage claiming to be from a meeting in August of Allardyce telling two men purporting to be from a Far East firm that he could offer advice on how to "get round" Football Association (FA) regulations concerning the transfer of players under third-party ownership.

He was also alleged to have reached an agreement worth £400,000 to represent the fictitious firm to investors and be a keynote speaker at certain events, though he made it clear than any arrangement would need FA clearance.

Allardyce has since returned to management via Crystal Palace in the Premier League but the 62-year-old opened up on the mental and physical pain he suffered after his exit.

"Driving back that night, on my own, I had never driven so slowly in my life," Allardyce told Daily Mail. "A few people rang. I spoke to them.

"And I wasn't just proud to be the England manager. I was ready. I felt comfortable being there.

Allardyce continued: "It's worth remembering that the police didn't discover anything worthy of investigation. And before a parliamentary select committee Robert Sullivan from the FA said I hadn't been in breach of any FA rules. Or told anybody how to breach FA guidelines on third-party ownership.

"In fact, he said I was actually doing nothing more than stating the FA's position. When I went to Wembley I didn't think I was about to lose my job. I just thought it was going to be a discussion about how we navigate through it.

"But the process was not what I expected. People have told me that if it was a similar-sized business there would have been a lengthier HR process. I'm not criticising the FA because they felt they needed to make a decision. I didn't want to go but in the end there was a mutual agreement."

"When I got back from Spain, [Alex Ferguson] Fergie invited me to a game," Allardyce added.

"He told me to get up and get back out there. He's a man of great wisdom. The more people like that support you, the quicker you recover."

Allardyce was replaced by Gareth Southgate and of the World Cup qualifier against Malta in October, the former said: "I couldn't watch. I tried to. I maybe lasted 15, 20 minutes. But I couldn't continue. I had to turn it off and watch something else.

"It was Wembley and I hadn't even had the opportunity to get a game under my belt there. That would have been a big moment for me. It was a gut wrencher, that."