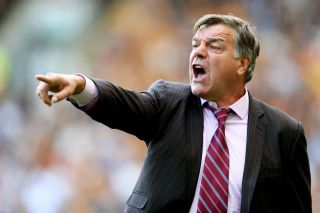 The Upton Park outfit have found the net just four times in their six Premier League games this season, scoring twice against both Cardiff City and Everton at home.

Allardyce's side have struggled for goals without club-record signing Carroll - who is yet to feature this term after his close-season move from Liverpool due to heel and foot injuries - and face a tough trip to face third-placed Tottenham on Sunday.

Andre Villas-Boas' men have the joint-best defensive record in the top flight having conceded just twice all season, and Allardyce believes that while Carroll's unavailability is a blow, other members of the side need to take responsibility in front of goal.

"Our season doesn't hinge on Andy getting back. He is a big player in many ways, but our failing is not that we have lacked chances," he said.

"What we have lacked is taking them and our players can't keep missing them."

West Ham's profligacy was in evidence during their 1-0 defeat at Hull City last week, where they had 19 efforts but failed to score.

"All the other players getting these chances have failed to put one in the net, and that's why we're suffering the consequences," Allardyce added.

"We've always been a team who have shared the goals out, but we're not doing that at the moment."

The former Bolton Wanderers and Newcastle United boss went on to say that Joe Cole is back in contention for a place on the West Ham bench after a month-long lay-off with a hamstring injury.

"Joe is not ready to start because we haven't seen him on the pitch for a while, but we hope he is ready to be in the squad," he said.