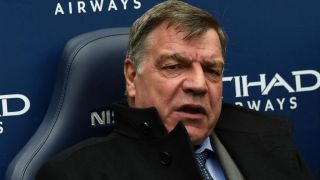 Sam Allardyce wants England to use the bitter experience of their Euro 2016 failure to inspire a turnaround on the road to the 2018 World Cup.

Allardyce was confirmed as Roy Hodgson's successor in the England hotseat on Friday, agreeing a two-year deal with the Football Association.

Despite the job increasingly being viewed as a poisoned chalice, the 61-year-old said he "cannot stop smiling" after winning a post he missed out on in 2006.

Far from wishing to bury the memory of a humiliating last-16 loss against Iceland, Allardyce wants this humbling setback to inspire his players when they begin their Russia 2018 qualifying campaign against Slovakia in September.

"First and foremost it's about regaining a little bit of confidence they might have lost after the Euros - putting that away and putting that to bed," he said in an interview on the FA's YouTube channel.

"Also gaining from the experience they gained at the Euros. It's a very bitter experience, as we all know, but that bit of drive the players should keep. They should hold it and use it as a positive.

"They should say 'I don't want to experience that again'."

Motivational qualities are widely regarded as one of Allardyce's strongest suits and he will aim to bring the methods honed across spells with Bolton Wanderers, Newcastle United, Blackburn Rovers, West Ham and Sunderland to fruition on the biggest stage.

"Man management," he said, when asked to identify his strengths. "There's no doubt that over many, many years now I've accumulated great coaching techniques like sports science techniques, which everybody knows has been one of my big adventures since 2000-01 when I took Bolton into the Premier League.

"I've created a backroom staff that delivers a great service in all areas and all departments and you have to manage that. It's not just managing the players, it's managing that staff - to delegate to them and give them confidence to produce the qualities that they have which are actually better qualities than mine.

"I love finding a person who has greater qualities than me in my department and giving them strength. That gives me greater strength to do my job."

The lessons learned over a career which has largely been concerned with successful battles against relegation as opposed to the pursuit of major honours mean Allardyce thinks now is the right time for him to take on a job he views as being at the pinnacle of his profession.

"I'm at the right age, with the right experience," he explained. "Hopefully I can pass a lot of my knowledge and experience on to the team and the staff that works behind the team to try and get a very happy camp that becomes very successful.

"You dream about being a manager and you achieve it, then you think about the ultimate goal. If you strive for the ultimate goal you might never get there but if you keep going and keep being successful ultimately you will."

"For me it's a privileged position to have now got top of the tree and the top of the ladder. No job could be bigger than this for me."