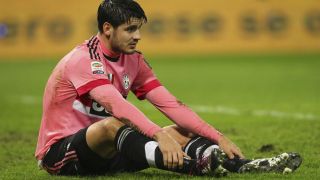 Massimiliano Allegri has backed Alvaro Morata to rediscover his scoring form, but confirmed Mario Mandzukic will return to the starting line-up for Sunday's meeting with Udinese.

Morata has failed to score in each of his last 17 appearances for Juve - his only Serie A goal this season coming in the 3-1 win over Bologna on October 4.

Allegri believes it is only a matter of time until the Spaniard finds the net again, but is likely to drop him for the trip to Friuli in favour of Mandzukic following the Croatian's recovery from a calf injury.

"Morata will do well and get back to scoring, as he has proved many times. He possesses great quality and must remain calm," the 48-year-old said.

"Mandzukic has recovered and will play. You'll have to wait and see [who will partner him]. Simone Zaza has become an important player for this team."

The Juve coach called on his team to show improvements against Udinese despite nine straight victories in Serie A lifting them up to second position.

"I was never the only one who still believed in the Scudetto. In football, as in life, there are difficult moments, but we got back on track thanks to the lads," Allegri added.

"That is not enough, there are many more games to go and I'll field my best formation in every match.

"We can and must improve from a technical standpoint. Our aim is to be up there vying with the biggest in Europe.

"We have a difficult game against an Udinese side in good form, while it will also be a special day for them inaugurating the new stadium."