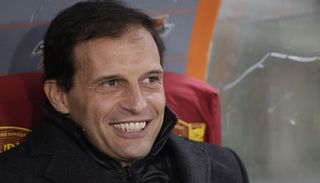 Allegri's players have voiced their support for the coach, who has overseen an impressive revival in the second half of the season with only one Serie A defeat since the winter break.

The phlegmatic Allegri, who won the Serie A title in his first season at Milan and led them to second place last term, had to cope with a firesale of players in the close season amid belt-tightening at the club.

Boosted by the signing of Mario Balotelli in January, Milan's performance has been better than expected, yet rumours still swirl around the club that owner Silvio Berlusconi has had enough of the coach.

On Tuesday, Milan denied suggestions that Allegri was in talks with ambitious AS Roma. Meanwhile, midfielder Kevin-Prince Boateng and forward Stephan El Shaaraway have led the chorus for him to stay.

"He has done a great job in these three years and needs to stay," Boateng told Italian media. "For me, there isn't a Milan without Allegri.

"Next year we have to do better, as there were so many new players this time. We need to work together so we can win the Scudetto," he added.

El Shaaraway told Milan Channel: "We are a good group of players, led by a great coach, and I hope we can all be here together next season."

However, Chief Executive Adriano Galliani would not be drawn on Allegri's future.

"I just want to talk about Sunday, the match against Siena. We are confident and expect to qualify for the Champions League and, before Sunday evening, we will not talk about the transfer market nor the coach," he said.

Milan are two points clear of fourth-placed Fiorentina, who visit bottom club Pescara and have the better head-to-head record.

Champions Juventus visit Sampdoria while Napoli, who have guaranteed second place and Italy's only other direct place in the Champions League group stage, are at Roma.

With relegation also settled and Palermo, Siena and Pescara heading to Serie B next season, the only other issue are the two Europa League places.

One of those will be taken by either Milan or Fiorentina while fifth-placed Udinese are in pole position for the other.

Udinese, who have won their last seven games, visit troubled Inter Milan with a two-point advantage over Lazio, the only team who can catch them and are at Cagliari.

Inter will be glad to end a nightmare season which has seen them decimated by injuries and miss out on European football for the first time in 14 years.

They have lost seven of their last 10 games and President Massimo Moratti has repeatedly had to clarify the future of beleaguered coach Andrea Stramaccioni.

"We have too many injuries to give a clear verdict on the coach," he said after Sunday's goalless draw at Genoa.