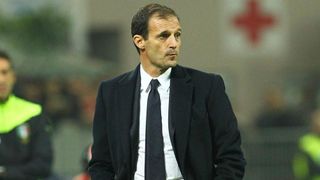 Massimiliano Allegri has voiced his delight with Juventus' ominous form and has set his sights on a fifth successive Serie A title.

The reigning champions are on a nine-game winning streak in the league and, despite a poor start to the season, now sit just two points behind leaders Napoli.

Allegri told Juventus TV: "We didn't make a great start but now we're flying. Our goal is to win the Serie A title.

"The toughest of our recent wins? Tough question! I'll go for the 3-1 win over Fiorentina.

"I was concerned before our first game after the winter break versus Verona. Getting back into the swing of things is always tricky after a break.

"The title race is unbelievably tight and I think it will go right to the wire."

Allegri also touched on Juventus' Champions League round-of-16 tie with Bayern Munich and is optimistic about their chances of progressing to the quarter-finals.

"We got dealt one of the toughest Champions League draws but we believe that we can reach the last eight," he added.

"The atmosphere is top class at Juventus Stadium and has the power to carry the boys through tough moments."