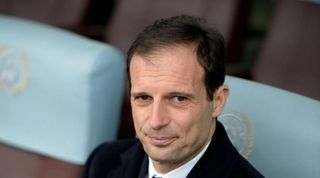 The Italian champions face Dortmund in the first leg later this month, but take on Cesena and Atalanta before then in Serie A.

Ahead of the trip to Cesena on Saturday, Allegri says his side remain focused on maintaining their seven-point lead at the summit.

"We're after a vital three points to keep our advantage intact," he told reporters prior to a clash that will be played on Cesena's synthetic pitch at the Stadio Dino Manuzzi.

"There will be changes and we will be better trained to face Cesena.

"Only then will we think to the game with Atalanta, then the one with Dortmund, which is not only important for me but for everyone, for the fans, for society, for Italian football.

"Because I think that Juventus has a duty to Italy to go as far as possible in the Champions League.

"But we'll think about this on [next] Saturday morning, after the game against Atalanta."

With Alessandro Matri injured and Carlos Tevez suspended, Allegri will be forced to reshuffle his attacking pack against a Cesena side just a place and six points off bottom side Parma.

"Let [Fernando] Llorente and [Alvaro] Morata play is all I hear and read this week," Allegri added.

"They may play together, I still haven't decided on my pairing, [Kingsley] Coman's also in with a shout.

"Will I rest [Andrea] Pirlo? No, he'll be involved.

"Our aim was to get to February-March still firmly in the race on all fronts - that's where we are as it stands."