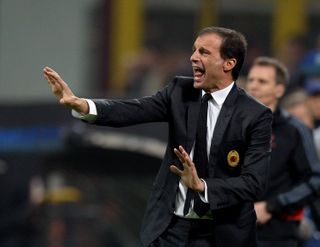 Kaka had given Allegri's side the lead at San Siro on Wednesday with a delightful curling effort in the 54th minute, but they failed to push home their advantage and Lazio equalised with 18 minutes from time when Mickael Ciani nodded in a cross from the right.

Despite seeing his team surrender the lead, Allegri was adamant they put in a good performance.

"We have to keep working and putting in this sort of performance," he told Sky Sport Italia.

"The side played well in terms of technique and defending, but we lost our unity a little after the equaliser and allowed a couple of dangerous counter-attacks.

"After going 1-0 up we didn't take some more chances, but then with this goal we were caught out after a corner and got punished.

"Once again, the only mistake we make in a match leads to a goal.

"How we get out of this situation is to keep working. We're far away from third place, so we have to get back to winning ways and have a difficult game with Fiorentina coming up.

"We cannot let our heads drop, as if we keep playing like this then I'm sure the team will get some good results."

Allegri, who had criticised forward Mario Balotelli following Sunday's 3-2 defeat at Parma, praised the Italy international on this occasion, as well as lauding goalscorer Kaka.

"Balotelli had a good game," he said.

"He worked hard and attacked the space, which wasn't easy against Lazio. I am happy with his performance this evening.

"Kaka achieved great things with Milan and he wants to prove he's still a champion.

"He's a humble guy and knows technique is not enough to stay at the top level, so he sets the example for younger players.

"As well as bringing a champion back to Italy, Milan have brought in an example in how to train and be a professional football player."