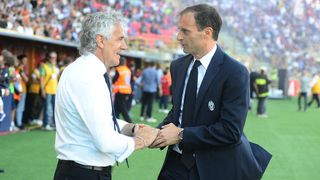 Massimiliano Allegri is looking to end a "beautiful" Juventus season with the Champions League title after they finished their Serie A campaign with a victory at Bologna.

The Bianconeri fought from a goal down to win 2-1 on Saturday, with goals from Paulo Dybala and - at the death - teenage forward Moise Kean, to cap a fine domestic season in which they won the league and the Coppa Italia.

And while Allegri reserved special praise for Kean and the other young members of the Juve squad, his focus quickly turned to the European final against Real Madrid in Cardiff.

"The season, right now, is beautiful," he told Mediaset Premium. "We have Cardiff and, from Monday, we will prepare only to win.

"It's beautiful to note the games of Kean and [20-year-old goalkeeper Emil] Audero. There are other good guys, who will play next year. The team did well and we woke up after the goal.

"The first time we went [to the Champions League final against Barcelona in 2015] with a gentle pace. We will go to Cardiff with serenity, which is how finals are won.

"It will be a fascinating game against an extraordinary team. We have to play with confidence - it is an important match that does not happen every year.

"We will play the second after three great seasons, thanks to the boys and the club. It takes enthusiasm [to win] but also serenity."