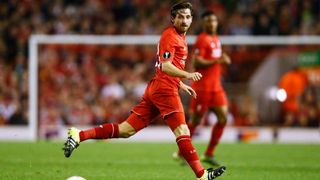 Joe Allen admits he is facing an uncertain fight to safeguard his future at Liverpool.

The Wales international midfielder, a £15million signing from Swansea City in 2012, has made just one start in the Premier League for Jurgen Klopp's side this season.

With his contract now entering its final 18 months, the 25-year-old concedes that his lack of playing time is a problem.

"That's gone very quiet," he was quoted as saying by The Guardian when asked about contract talks. "I'm not too sure really.

"I've only made one league start this season, so I want to play more. I think that's obvious for any player in that situation.

"From my point of view it's just about knuckling down, doing my job and giving my best, which is always what I do."