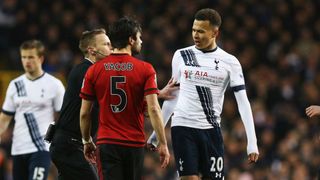 Tottenham midfielder Dele Alli could find himself in trouble with the Football Association after he appeared to punch West Brom's Claudio Yacob in the stomach during Monday's Premier League match.

Alli has been a standout performer in Spurs' impressive season, and his displays were formally recognised when he was named the PFA Young Player of the Year on Sunday.

But during Monday's 1-1 draw at White Hart Lane - which put a huge dent in Tottenham's Premier League title ambitions - Alli was seen to punch midfielder Yacob as the pair ran into the West Brom penalty area.

The incident was not seen by the referee Mike Jones, but Alli could face retrospective action from the FA and with three matches remaining, may miss the rest of the season.

"I didn't see it, I heard some comments," Mauricio Pochettino told Sky Sports when quizzed on the incident.

"I need to watch the game and the action but I didn't see it and can't say anything now."