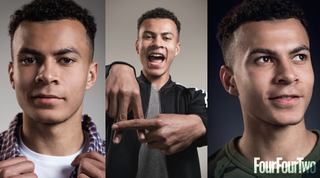 The 19-year-old attacking midfielder has proved a Premier League sensation since completing his £5 million move to Spurs from Milton Keynes Dons last summer, scoring seven goals in 25 league appearances for the Londoners.

And the Buckinghamshire-born tyro has already enjoyed success on the international stage, earning four England caps since the beginning of October and scoring on his first senior start, against France at Wembley.

The youngster has also attracted some negative headlines. Alli was yellow-carded after appearing to kick Fiorentina defender Nenad Tomovic in a recent Europa League clash, having also been accused of stamping on Crystal Palace midfielder Yohan Cabaye by the Eagles’ manager, Alan Pardew.

But Alli insists that he does not intend to alter the combative aspect of his game, and has been encouraged by his captain to continue being himself.

Speaking exclusively in the April 2016 issue of FourFourTwo, he says:

“I used to get quite angry on the pitch, so if I made a bad tackle or got a bit aggressive, [former MK Dons coach] Dan Micciche would say: ‘That would be a red card in a professional match’ and take me out of the session. That probably calmed me down a bit on the pitch. But I still play with a bit of anger.

“As a younger player coming through, particularly in League One, you get a lot guys trying to kick you. A lot of the senior players told me I needed to be tough. Sometimes I get carried away with things, but I’m 19 and I’ve still got a lot to learn. [Mauricio Pochettino and I] have had a few chats about it.

"Hugo Lloris has been a big influence on me at Tottenham and he’s spoken to me about it, too. He told me not to let that aggressive side fall out of my game, so I’m just going to keep being myself.”

Read the full interview with Alli in the April 2016 issue of FourFourTwo, available in print, on iPad and iPhone. Want to watch more exclusive interviews with Alli, plus our other cover stars Dimitri Payet, Riyad Mahrez and Hector Bellerin? Of course you do! Subscribe to FourFourTwo’s YouTube channel to see them, plus our library of Performance videos on how to train, think and play like a pro.