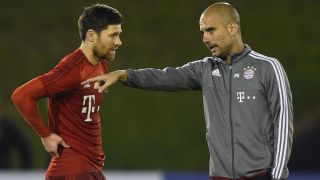 Bayern Munich midfielder Xabi Alonso is excited to work with Carlo Ancelotti once again, but admitted he is sad to see Pep Guardiola go.

Guardiola revealed he will leave the Bundesliga champions at the end of the season, with the club swiftly announcing Ancelotti as his successor.

Alonso played under Ancelotti at Real Madrid two seasons ago, with the Italian coach guiding the club to a record 10th European Cup.

And Alonso is excited at the chance to link up with Ancelotti once again.

"I've already told my colleagues how good he is," he said.

"He is a great coach, and has had success with AC Milan and Real Madrid in the Champions League."

However, Alonso said he wished Guardiola - who is intent on a move to the Premier League - was staying in Munich.

"We all wanted Guardiola to remain," he added.

"He is the best coach I've ever worked with."