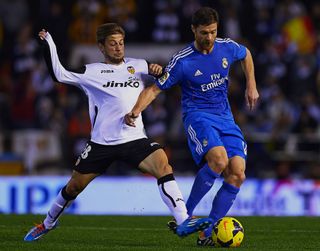 The Spain midfielder was caught by France defender Jeremy Mathieu when challenging for a header on the hour mark in Real's 3-2 win at the Mestalla.

Alonso was able to continue, but he was sent for scans in Valencia after the game and Real stated on the club's official website on Monday morning that he had perforated his left eardrum.

The former Liverpool man was due to fly back to Madrid for further medical examinations to discover the extent of the problem and how long he will be sidelined.

It is a another stroke of bad luck for Alonso, who has been linked with a return to Liverpool as well as their Premier League rivals Chelsea and Manchester United, after he missed two months at the start of the season due to a knee problem.

Carlo Ancelotti's side are five points behind the top two of Barcelona and Atletico Madrid - both locked on 46 points - heading into the mid-season break.