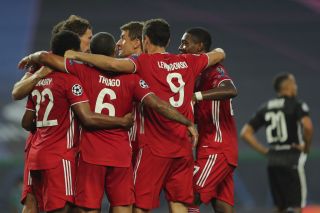 Alphonso Davies believes the hunger for glory has inspired Bayern Munich after they reached the Champions Legaue final with a comfortable 3-0 victory over Lyon.

Serge Gnabry scored twice, including a stunning opener, before Robert Lewandowski netted his 55th goal of the season late on.

Bayern now face PSG in the final in Lisbon on Sunday aiming to win the competition for a sixth time.

Canada international Davies told BT Sport: “It feels good, everyone’s happy and playing well. We’re happy we’ve made it to the final. Even though they (the older players in the squad) have won many, many titles before they are still hungry to win this one.

“PSG are a good team. For now we celebrate a little bit but afterwards we focus on the next game. It’s going to be a good game, there’s going to be goals in it.

“This is what you dream of as a footballer – playing against the best in Europe – and we’re able to do that, I’m excited.

“For me, it’s a dream come true. Playing in the Champions League and making it to the final. It’s everything you can ask for.”

Memphis Depay hit the side netting and Karl Toko Ekambi struck the post for Lyon before Gnabry opened the scoring after 18 minutes.

The winger cut inside and, with Lyon unable to stop him, smashed a rising drive into the top corner from the edge of the area.

Just 13 minutes later it was 2-0 when Gnabry pounced from close range after Lewandowski was denied by Anthony Lopes.

There was no way back for Lyon when Manuel Neuer denied Ekambi and, after Philippe Coutinho had a goal disallowed for offside, Lewandowski nodded in Joshua Kimmich’s free-kick two minutes from time.

He becomes just the second player in the history of the Champions League to net 15 goals in a single campaign, along with Cristiano Ronaldo.

But Lyon, who beat Manchester City in the quarter-finals, were left to rue their early missed chances.

“Luck wasn’t on our side. We missed chances and we were up against a great team. We found out they were unbeatable.

“We started really well and we should have scored. My shot that hit the post could have gone in. When you do things as a team, anything is possible. We showed it during this campaign.”

Defender Marcelo echoed his team-mate and admitted Lyon were not clinical enough.

“We missed the efficiency in front of goal,” he said, speaking to POLSAT. “I’m proud of my team, we faced a great team and played at the same level.”