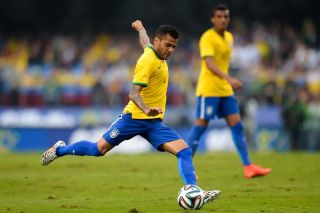 The hosts begin their campaign on Thursday against Croatia after rounding off their preparations with a narrow 1-0 friendly victory over Serbia on Friday.

Having dispatched Panama 4-0 in midweek, Fred's second-half goal ensured Brazil head into the tournament on the back of another win but with an unconvincing display.

Their performance on Friday attracted some discontent in the stands, and with expectation set to weigh heavily on Luiz Felipe Scolari's men on home turf, Alves wants Brazil to keep their mental focus.

"We must use our heads because we will have tough matches during the World Cup.

"That's why we must keep calm. Fans will think with their hearts and that's very complicated."

Brazil were frustrated for long spells by a stubborn Serbia defence, with Scolari expressing frustration at their lack of creativity when Neymar was marked tightly.

However, Alves felt the fixture was ideal preparation for breaking down more defensive sides they could meet in the coming weeks.

"It was a positive test for us because this is what we are going to face during the World Cup," he added.

"We will face players that know their positions on the pitch and they will play defensive.

"We must be patient to find our way through them. It will be like this tonight during the World Cup, maybe even worse."