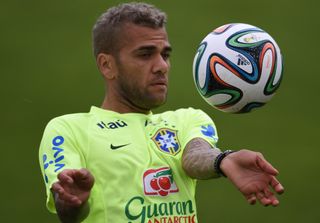 Chile or the Netherlands await Brazil, who are likely to need at least a point against Cameroon on Monday to seal their place in the last 16.

Alves said the hosts were unfazed about who they would face in the round of 16, insisting their aim was to finish top of the group.

"We're not going to think that now with this possibility if it's better to come first or to come in second in the group," he said.

"We want to be first. Second is just there to congratulate who comes in first and that's not the point of being here. We can't think about choosing this or that.

"We have to follow our path. Our path is to finish the first group stage in first place, and who we face in the second phase we have to try to get them out and then after that get them out, and then get to the end.

"We can't think about this now."

Cesar has established himself as Brazil's number one shot-stopper after his selection was questioned due to the 34-year-old now playing for Toronto in MLS.

"I have made it clear that I really primed myself for this World Cup regardless of the fact that some critics did not agree with my choice of going to play in a league that is in theory not strong," he said.

"I can look in the mirror and say I believe in myself. I made an important save against Mexico to help us get a draw and physically and mentally I am prepared."