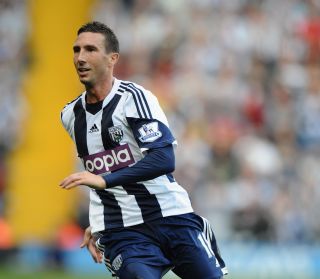 The 28-year-old move to the Hawthorns on a season-long loan deal from Ligue 1 outfit Marseille in September after making 87 appearances in two seasons at the Stade Velodrome.

Amalfitano has made a huge impact for Steve Clarke's side since his arrival, putting in a series of fine displays and scoring twice in four Premier League games, including a 2-1 win at Manchester United.

And the Frenchman is keen to continue his impressive form on the pitch.

"It is always a pleasure to arrive and be able to perform well straight away," he told the club's official website.

"I got a really good feeling as soon as I arrived at the stadium and I could feel the support from the fans.

"I needed to do my best to thank them by doing well on the pitch.

"I have been thinking about coming to the Premier League for a few years and now I am very happy to be here.

"Now I really want to think about my career and carry on in the best way possible.

"I have progressed in my career because I have learned from each club I have played for - and Marseille is a big club.

"But at the same time playing in England is different as well, and I have to prove myself again to everyone.

"My move here is a continuation of my career. I'm having to perform at my best as a professional."