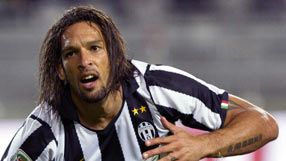 Juventus striker Amauri continued his and his club's injury-plagued start to the season by picking up a knee problem in training, the Turin side said in a statement.

He will miss Sunday's trip to Genoa and reports say he could be out until next year.

With Filippo Inzaghi and Alexandre Pato injured, AC Milan's Ronaldinho would be happy to play alongside Zlatan Ibrahimovic as a striker at home to Fiorentina on Saturday given Robinho's shaky form.

"I will play where (coach Massimiliano) Allegri tells me to play," the Brazilian, on the bench in recent weeks, told reporters. "I want to stay here."

Inter Milan's treatment room is still packed and defender Cristian Chivu is the latest to be ruled out of Sunday's game at Chievo after suffering a groin strain in Romania's 1-1 friendly draw with Italy on Wednesday.

Second-placed Lazio visit Parma on Sunday but have a doubt over defender Andre Dias after he picked up a knock in training.

AS Roma midfielder Jeremy Menez has had his house burgled ahead of Saturday's home game with Udinese with reports saying 100,000 euros worth of goods were stolen.