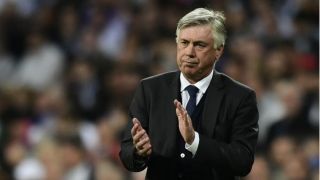 Real Madrid will look to attack Juventus in their UEFA Champions League semi-final first leg and take a lead back to the Spanish capital, says Carlo Ancelotti.

Once again without Karim Benzema for the trip to Turin, Ancelotti is confident Real possess enough fire power to see off Massimiliano Allegri's men, having seen Javier Hernandez come up with a quarter-final winner against Atletico Madrid.

Dreams of winning back-to-back Champions League titles remain alive for the Spanish giants, but Ancelotti acknowledges they face a tough test against a Juventus side brimming with confidence after sealing a fourth successive Serie A crown last weekend.

"I think it will be a balanced tie, Juve are a different side [to Atletico], so I expect a different game," he said. "We dominated against Atletico, but Juventus like to control possession too.

"They won the league last week and are playing with confidence. They have players with a lot of experience and really good qualities.

"We've got to try and play to our full potential. We are not going to look to draw, we are going to attack and have plenty of quality to do so.

"We want to play an attacking style, maybe we'll have to defend better in this game than in recent outings."

Ancelotti added on Benzema's continued absence due to a knee injury: "I wouldn't say it's a problem with Hernandez playing so well

"He helped us brilliantly in recent games, and we're here because he played an important role, he grabbed that opportunity and I'm sure he will help the side."