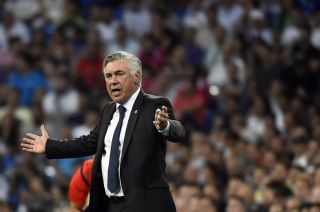 Karim Benzema and Cristiano Ronaldo were both on target as Real opened their La Liga campaign with victory against newly promoted Cordoba at the Bernabeu.

Benzema made the breakthrough on the half-hour mark, rising highest to head home Toni Kroos' corner.

The match was in the balance up until the 90th minute, with Ronaldo sealing the points after finding the back of the net from long range.

Taking nothing away from Cordoba, who gave a good account for themselves, Ancelotti said two midweek fixtures against city rivals Atletico Madrid in the Supercopa de Espana took its toll.

"We were tired," he told reporters. "We only played three days ago, and it's not easy to go straight back into action after that amount of rest.

"Having said that though, I think we controlled the game.

"We're not at our best yet. We need to quicken the game up.

"But I'm sure that will come with time."

Ancelotti also leapt to the defence of on underfire striker Benzema, who ended his goal-scoring drought for the UEFA Champions League winners.

Benzema's opener on Monday was his first for the club since netting the match-winner in the home tie of their Champions League semi-final against Bayern Munich in April - a run of nine games.

"When a striker like Karim score everyone is happier," the Italian tactician said of Benzema, who scored three goals for France at the World Cup in Brazil.

"I've always appreciated the work he has done in the previous games even if he hasn't scored.

"He is not fit enough like the rest of the team mates, but it would be much concern if he was.

"We've just started today and obviously we have to be quicker and have more velocity in the game, but the most important is to win, struggling, but at the end everything was ok."