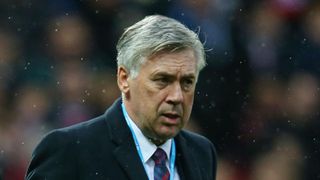 Bayern Munich defender Jerome Boateng is looking forward to working under Carlo Ancelotti and expects the Italian to be a similar coach to Jupp Heynckes.

Heynckes guided Bayern to a historic treble in 2012-13, before making way for Pep Guardiola.

Ancelotti in turn will replace Guardiola as the man in charge ahead of the 2016-17 campaign and Boateng has little doubt the 56-year-old is the right man for the job.

"It's not like I started calling people right away to find out what kind of coach Ancelotti is," Boateng told Abendzeitung.

"You simply know stuff like that already. Toni Kroos and Sami Khedira, who worked with him at Real Madrid, had already told me about him before.

"He is a bit like Heynckes. He is pretty calm, talks a lot to his players and has a good relationship with the team. And not a whole lot of coaches will be able to match him tactically.

"Ancelotti has seen and done it all, he has won a lot of silverware. It will be quite something to work with him and I am looking forward to it."