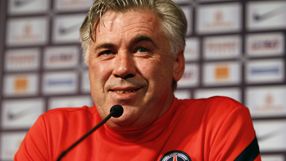 The Italian replaced Antoine Kombouare at the Ligue 1 team, owned by the wealthy Qatari Sports Investment group, in December.

PSG have slipped from first to second since Ancelotti, who won the Champions League with Milan in 2003 and 2007, took charge but they are just two points behind leaders Montpellier with five games to go.

"I hope to stay as long as possible," he told Reuters in an interview at the club's Le Camp des Loges training facility.

"I know my time here will depend on results, and that's fair, but we're working well and will improve. The whole project, building a competitive team, inspiring a new philosophy, weighed heavily on my decision to come here."

PSG have failed to qualify for the Champions League for six years but spent more than 80 million euros in the close-season to overhaul their squad, including splashing out a French record fee of 42 million on Argentina playmaker Javier Pastore.

"We want to be competitive in the Champions League as soon as next year and I think we will be," said Ancelotti who needs to finish in the top three to qualify.

"We want to go as far as we can although it is hard to set up a goal until we enter the competition. Making the quarter-finals would be a good start as it would mean being one of Europe's top-eight clubs."

Ancelotti, however, will need to strengthen a squad that failed to reach the last 32 in this season's Europa League.

"We have the facilities we need, we have a great stadium but we clearly lack the strength in depth to be called a great team," he said ahead of Sunday's Ligue 1 clash at third-placed Lille.

"We need gifted players and we will try to find some but we will not revamp the team. We will add a few players to improve the squad's overall quality."

Ancelotti could be handed the top players he is seeking after PSG chairman Nasser al-Khelaifi said he would spend as much as 100 million euros in the next transfer window.

"It is difficult for any team to win the Champions League," said the Italian.

"It is impossible to say when we will be able to win because it needs everything to be in the right place at the right time. It was difficult for Real Madrid and Barcelona," added Ancelotti referring to this season's beaten semi-finalists.

Chelsea's victory over holders Barcelona came as no shock to the Italian.

"I was not that surprised as Chelsea are talented and experienced," he said.