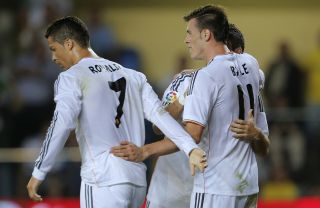 And although Real failed to win for the first time in four league matches this campaign, Ancelotti said his world-record signing Bale and Ronaldo worked well in their first outing alongside one another.

"It was the first time that they both played together," Ancelotti said.

"It is possible that sometimes I swapped their positions in the pitch, but there is nothing strange about that."

On Bale and other debutant Asier Illarramendi, Ancelotti said he saw enough from the pair before substituting them on 62 minutes.

"They suffered a little bit at the beginning of the match, like in every game, but they both played a very good game," the Frenchman said.

"I didn't want to take any risk so I didn't put them to play 90 minutes. That's why I changed after 60 minutes."

Ancelotti, though, praised goalkeeper Diego Lopez, who continues to keep captain Iker Casillas on the bench, for helping his side earn a point.

"Diego has played very well today, he is very clever," he said.

"I don't know if he saved the team against the defeat.

"What I know is that we should have paid more attention in order to win the game, especially in the centre of the pitch. We could undoubtedly have won."

Ancelotti excused his side's conceding of two goals and points dropped due to the match coming on the back of the international break.

"It was a difficult match but I don't think it was the worst match we played," he said.

"It was only a different match, because the pace between the two teams was different.

"It is not only a physical problem, it is also a mental problem.

"But in the end, I think the attitude after the first goal was good and we scored two goals. So if we had paid more attention we would have won."