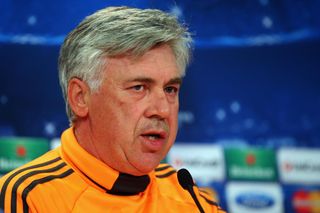 The vastly-experienced Italian failed to guide the Ligue 1 club to the title after taking the reins from Antoine Kombouare in the 2011-12 winter break, as PSG finished second behind Montpellier.

Ancelotti, now Real Madrid coach, put that right in his first full campaign in charge, though, masterminding their first league title in 19 years at the end of last season before departing to take over at the Bernabeu.

And the former Milan coach feels that the French champions have improved immeasurably in a short space of time, with Laurent Blanc's men currently standing on the brink of retaining their title.

"We didn't have a real identity to our play in that first season," he told the official Ligue 1 website.

"I felt respected in France; it was just difficult to change the working mentality when I arrived.

"We needed to change that in order to fulfil the ambitious objectives set out by the Qataris (Qatar Investment Authority, owners of the club), in order that Paris became a team in accordance with the financial potential of the club.

"I think Paris has improved a lot on this front and now PSG has that winning mentality."