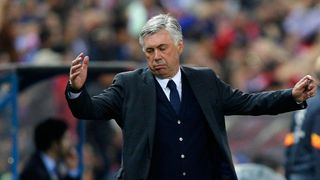 Atletico goalkeeper Jan Oblak was in fine form at the Vicente Calderon on Tuesday as the match ended 0-0, the Slovenian making five saves in the first half alone.

Oblak started with a brilliant stop to thwart Real winger Gareth Bale in the fourth minute and that was a sign of things to come throughout the opening period as the visitors were continually denied.

The draw left Ancelotti frustrated, with the Italian labelling the result "the best of the worst".

"I think, especially in the first half, we deserved more than the 0-0. The first half from Real Madrid was fantastic, we played very well, with personality," Ancelotti said in quotes reported by AS.

"The second half was different because they pressed more and had difficult possession. The result is not good but we are confident - the result is the best of the worst."

"[Oblak] was the protagonist in the first half. We deserved more. He has been fantastic," Casillas said.

"Then Atleti has not left us so much and got better control of the game. Atletico in the second part has done more to calm down."