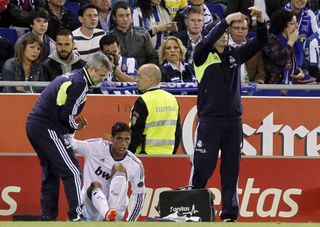 The 21-year-old underwent knee surgery in May, missing the end of last season and the start of this term while he underwent rehabilitation.

He has yet to make an appearance under new boss Ancelotti, but the Italian has said the France international is nearing a return - although Sunday's game with Getafe will come a little too soon for him.

"Varane is doing well and will be back next week," he said.

Ancelotti has other injury concerns ahead of the match with their city rivals, with both Iker Casillas and Fabio Coentrao unavailable.

Goalkeeper Casillas had to be substiuted early in their UEFA Champions League win over Galatasaray with a rib injury, while full-back Coentrao has been struggling with a hamstring problem.

"Casillas won't be available for tomorrow's match but he should be back next week," the former Paris Saint-Germain, Chelsea and Milan manager added.

"Fabio Coentrao will start training with the team next week and will hopefully be ready to play against Elche."