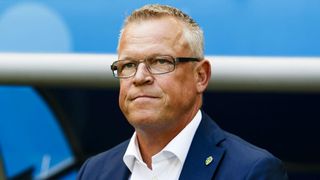 Janne Andersson says the current England team's style is a far cry from the game he grew up watching on television as a teenager.

The Sweden head coach faced the media on Friday ahead of his nation's World Cup quarter-final against Gareth Southgate's side, who squeezed past Colombia on penalties in the last 16.

After topping Group F, Sweden defeated Switzerland 1-0 in the second round thanks to Emil Forsberg's deflected effort and victory in Samara on Saturday would see them through to the last four of this tournament for the first time in 24 years.

The two sides have become familiar foes after meeting three times at major finals since the turn of the century - England triumphing at Euro 2012 following draws at the 2002 and 2006 World Cups - and Andersson revealed how as a youngster he would spend his weekends watching the English top flight.

"I can talk about that for a long time, I grew up in the 70s following English football," he said. "There was only one televised match a week those days, on a Saturday afternoon.

"You were looking forward to Saturday and I was always a huge fan of English football.

"I remember the muddy pitches, I grew up with all of this, England was my second nation so it is a wonderful feeling to be facing England now."

But Andersson rejected the notion that Southgate's side play a style of football akin to the no-nonsense mantra associated with that era.

"It's full of heart, spirit, of fighting, I've always appreciated it but no, it's not the England I grew up watching."

The Three Lions went a long way to banishing their shoot-out demons against Colombia in Moscow on Tuesday and Andersson says his side consider themselves equally well drilled if the tie goes the distance.

"Generally speaking I believe in being thorough, and we have prepared how we'll deal with extra time and a potential penalty shoot-out," he said.

"We did this before the previous match but we have our approach and our ideas of who will take penalties."