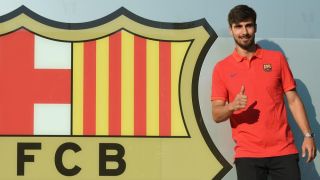 Andre Gomes has revealed that he opted for a move to Barcelona because he feels the Catalan giants better suit his identity than Real Madrid.

The Portugal international signed a five-year deal with Barcelona on Wednesday to complete his move from Valencia.

After Gomes was strongly linked with a move to Madrid, it was Barca who acquired his services, parting with an initial fee of €35 million for the midfielder that could rise to €70m.

"I am grateful that Barcelona have given me this opportunity. This is a dream. I am delighted to be part of Barcelona and I now just want to enjoy myself here and win a lot of titles with this club," Gomes told reporters.

"I personally prefer Barcelona [over Madrid] because the club relates to my way of playing football and to my identity.

"I had to make a decision that I thought was best for me and my family. I never had any doubts when Barcelona came knocking. It is an honour to be wearing the Barcelona jersey. I want to win it all here."

The 22-year-old faces stiff competition for a starting berth at Barcelona, but he is looking forward to the challenge ahead.

"We have a lot of players in midfield at Barcelona and they are all great. I have many references here. But I want to keep developing and learning. I am only 22, almost 23, and I have time to adapt and improve as a player. I want to work hard and give my all," Gomes added.

"The most important thing is what the coach requires from me. I have to adapt to Barcelona's philosophy. I don't care in which position I play. I am most concerned with adapting to my new surroundings. I will need the support of the coach and my team-mates. I spoke with Luis Enrique on the phone and he told me he was very happy that I'm joining Barcelona.

"The competition for places is not a problem. I respect everyone and want to give my all. All the players here are great. I came here to learn, it is not as if I feel like Messi."

Gomes, who plays alongside Cristiano Ronaldo with the national team, will now be teaming up with Lionel Messi at Barcelona and he has nothing but praise for the illustrious duo.

"Messi and Ronaldo are both great. It is an honour to be playing with them. They each have their own style," he said.

"The most important thing for me right now is Messi and Barcelona, because I am not with the national team now.

"I am looking forward to teaming up with Messi and other stars like [Andres] Iniesta. Messi and Iniesta are references to me."