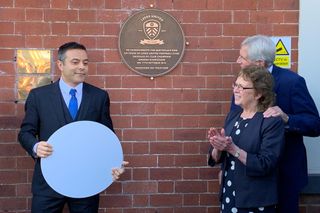 Radrizzani launched Leeds’ centenary celebrations on Thursday at the city’s Salem Chapel, where the club was founded in 1919.

On the eve of United’s 100th birthday, the Italian clarified comments he made in an interview with The Times when he revealed he had been approached “by more than 20 parties” and that three of them were of particular interest.

Chairman @andrearadri celebrates the past and looks to the future #LUFC100pic.twitter.com/bYWQYHiNDv— Leeds United (@LUFC) October 17, 2019

In response to the article, published on Monday, Radrizzani issued a further statement, claiming Leeds were “attractive to potential investors”, but that he was not actively seeking investment at this moment.

“Because of the job we have done in the last two or three years, we have attracted a lot of interest,” Radrizzani said.

“Obviously the club has modernised on a lot of levels, which is shown by our revenues, which have increased a lot to close to £50million.

“Our attendance is the top of the league, the club has modernised the media (department), we have partnerships with Amazon, Wish and Deliveroo – big corporate companies are starting to work with Leeds and before my arrival this was impossible even to think.

“We have to be proud of the club and the fact we are attractive to potential investors.

“When and if we will open discussions is completely another story.

“It depends on the right moment, a moment where I believe we need support to build the club bigger than what we could do with our own resources.”

Radrizzani, 45, said in his interview that the three potential investors he was interested in were Qatar Sports Investments and two unnamed parties – a “big fan of Leeds” based in America and an Italian club owner.

QSI, which controls Paris St Germain, is run by Radrizzani’s friend Nasser Al-Khelaifi, who has worked closely with the Italian sports and media tycoon on several football TV rights deals.

Radrizzani, who bought Leeds from compatriot Massimo Cellino in December 2016, sold a 10 per cent stake in the club to 49ers Enterprises, the financial arm of NFL franchise the San Francisco 49ers, in May 2018.

Radrizzani unveiled a centenary plaque at Salem Chapel on Thursday morning after a commemorative service and Leeds’ managing director Angus Kinnear later revealed plans to expand the club’s Elland Road stadium during his speech at a civic reception.

Kinnear said the club were working in partnership with Leeds City Council on Vision Elland Road, which included plans to increase the stadium’s capacity to 50,000.

📰 | Don Revie's #LUFC side are to be honoured with the city’s highest civic honour, The Freedom of the City Award— Leeds United (@LUFC) October 17, 2019

“In our centenary year we’re very proud to announce a partnership with the council on two initiatives,” Kinnear said. “They fall under the title of Vision Elland Road.

“Part of it is around the stadium and taking our stadium up to 50,000 and turning it into a true ground which can compete with other stadiums in the Premier League and in Europe.”

Leeds City Council leader, Councillor Judith Blake, announced during the civic reception that the Leeds side of 1967-1974, managed by Don Revie, are to be given the Freedom of the City Award, the city’s highest civic honour.

The Council said the honour was in recognition of that Leeds team’s outstanding achievements in putting the city on the worldwide football and sporting map.