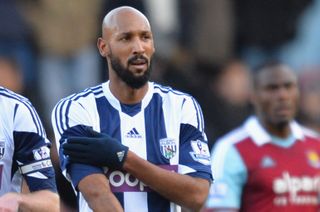 Anelka was charged under new anti-racism laws on Tuesday - which carry a minimum five-match suspension.

However, the striker has denied an "aggravated breach" of FA Rule E3(2) regarding actions that reference "ethnic origin and/or race and/or religion or belief".

The 34-year-old was embroiled in controversy after making the salute, which is said to carry anti-Semitic connotations in his native France, after scoring in West Brom's 3-3 draw at West Ham last month.

He defended the gesture by saying it was merely a dedication to his friend and comedian Dieudonne M'bala M'bala, but the incident drew widespread criticism.

M'bala M'bala, a controversial figure in France, saw live performances on his national tour cancelled by French courts recently – a move welcomed by the country's government.

A statement from West Brom said: "West Bromwich Albion can confirm that Nicolas Anelka has denied an FA charge regarding the gesture he made after scoring his first goal against West Ham United on December 28.

"The striker has requested a personal hearing.

"The club will make no further comment until The FA's disciplinary process has reached a conclusion."