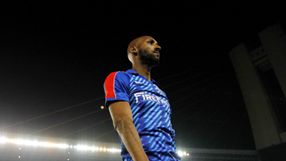 Former Chelsea striker Anelka became the most high-profile player in the Chinese league when he signed up with Shenhua in January.

Former France international Jean Tigana followed in Anelka's footsteps and signed a one-year contract to coach the club, which finished 11th in the league last season.

Despite the big-name signings, the club is fifth in the table, having won two out of their five matches so far this term.

"We have terminated the services of our three assistant coaches and now Anelka will take over as a temporary measure in their role," a spokesperson for the club said on Thursday.

"We will be announcing new appointments for assistant coaches next week. Tigana remains our head coach."

Anelka muddied the waters later when he tweeted: "It's official I just become the new player-manager of Shanghai Shenhua."