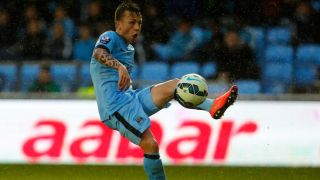 Manchester City full-back Angelino revelled in his performance against Bayern Munich and is hungry for more under Pep Guardiola.

The 19-year-old Spaniard played a full game as City suffered a 1-0 loss to Bayern in their first game with Guardiola at the helm on Wednesday.

Angelino's display was described as "amazing" by the manager, whose men went down to a 75th-minute Erdal Ozturk goal.

"It was a very special moment for me," he told City TV.

"I didn't expect to play a full game, but I say thanks to Pep and all the staff and hopefully I get some more minutes along this tour."

Angelino hopes he can continue to play a big part for City in pre-season, which continues with an International Champions Cup clash against United on Monday.

He said: "Every single day I've been enjoying every moment and I just don't want this to finish.

"It's good to see that he's bringing a lot of young people to the tour. I think he's showing that he doesn't care if you're young or old, if you're doing well you'll get your chance."