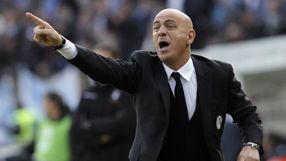 Table-propping Palermo's volatile president Maurizio Zamparini has sacked three coaches in his team's last six games, one of them twice, as his club nosedive towards Serie B.

Sannino will hardly be relishing a trip to AC Milan who were on the wrong end of a Barcelona masterclass in the Champions League on Tuesday, when a 4-0 defeat sent them crashing out of the competition.

Sannino was Palermo's first coach of the season but was fired after three games and replaced by Gian Piero Gasperini, who managed to hang on until the start of February.

That was when the fun and games really started. Gasperini was fired after his team lost to Atalanta and replaced by Alberto Malesani, who was himself sacked after three games in charge.

Bizarrely, Zamparini then re-hired Gasperini only to fire him again after two matches, the second being last Sunday's home defeat by fellow strugglers Siena which was followed by angry fan protests outside the stadium.

Sannino seemed reluctant to look even beyond his first training session as he contemplated his return to the hot seat.

"We must take it day by day, then see where we end up," he said. "We must concentrate only on the work that awaits us over the next two months, training session after training session, game after game.

"My predecessor is a great coach and at this moment we must respect the man and the professional."

The practice of firing and re-hiring coaches is common in Italy. Coaches can lead only one Serie A team per season and also often remain under contract when sacked, meaning they are cheaper to rehire.

That means Malesani would be the obvious candidate if Zamparini loses patience with Sannino.

Former technical director Christian Panucci, who quit the club after less than two months last season, gave an insight into the club this week.

"I would have happily continued, Palermo are an important part of Italian football, but after 40 days I realised there was no place for me," he told Sky Sports Italia.

"I made a lot of suggestions to the president Zamparini, but he just didn't listen to me."

Palermo are level on 21 points with Pescara at the bottom of the table, after winning only three of their 28 games.

They are five points from safety with 10 matches to go.

Despite their resounding defeat in Barcelona, Milan are Serie A's in-form team, having won seven and drawn three games since the start of the year.

That run has taken them up to third, the Champions League qualifying round spot, with 51 points, two behind second-placed Napoli, who have faltered badly with four draws and a defeat in their last five games.

Napoli, nine points behind leaders Juventus, will hope to stop the rot at home to Atalanta.

Their decline has coincided with a goal drought for Edinson Cavani, who remains Serie A's top scorer with 18 goals despite not scoring since the end of January.