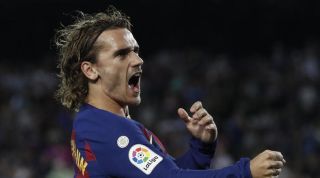 Arsenal’s failure to qualify for the Champions League in 2016/17 cost them the chance to sign Antoine Griezmann, according to reports.

The Gunners missed out on Europe’s premier competition for the first time in 20 years when they finished fifth in Arsene Wenger’s penultimate season in charge.

Wenger’s side accumulated 75 points from their 38 matches that campaign, one fewer than Liverpool.

The Athletic write that their failure to finish in the top four ended their hopes of acquiring Griezmann.

The France international, who swapped Atletico Madrid for Barcelona in a deal worth £107m earlier this year, is widely regarded as one of the world’s leading attackers.

He was heavily linked with Barcelona in 2018, before announcing in a documentary that he would remain with Atletico for at least another year.

Manchester United were among those interested in buying the former Real Sociedad man in 2017, and it has now emerged that Arsenal were keen to rival their fellow Premier League side for his signature.

Griezmann has previously claimed that he was also an Arsenal target in summer 2013, when his former agent Eric Olhats held discussions with Gilles Grimandi.

The player was keen to hold talks with Wenger about a potential move, but Arsenal ultimately rejected the Frenchman.

And although they were much keener to land him four years later, a fifth-place finish in the Premier League proved costly.

Arsenal bought Alexandre Lacazette from Lyon instead, while Borussia Dortmund frontman Pierre-Emerick Aubameyang also moved to the Emirates Stadium in the January window.

However, the new strike duo was unable to lead Arsenal back into the Champions League, with Wenger’s men finishing sixth in the Premier League in 2017/18.

The north Londoners were also knocked out of the Europa League after a semi-final defeat by a Griezmann-inspired Atletico.