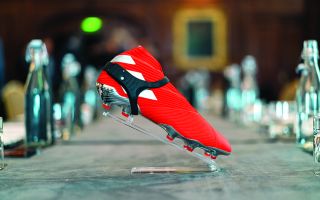 Argentina's national team are taking a hi-tech approach to their bid for gold at next year’s Olympics, after a partnership was announced with sports technology company PlayerMaker.

The country were gold medallists in the men’s football competition at both the 2004 and 2008 Olympics, and they will be using new technology to prepare and train for Tokyo 2020.

Players will wear PlayerMaker’s boot-mounted sensor during training sessions and games, collecting a range of technical, tactical and physical data, which can then be analysed by coaching staff.

Among the individual player performance statistics available will be the number of ball touches, left and right foot usage, possession analysis and pass completion - as well as team data such as information about passing networks and positioning.

The system is also used for rehabilitation and injury prevention - the sensors are positioned on lower limbs, measuring force and torque, with feedback given to players to avoid over-exertion.

“At PlayerMaker, we endeavour to create improvements for athletes at every level, from club youth academies to elite national teams,” said the company’s CEO, Guy Aharon. “The Olympics is the pinnacle of sporting prowess in the world. It’s a privilege to be part of the Argentinian team’s training and continued development.”

“We’re very impressed with the data PlayerMaker’s device offers us,” said Luciano Nakis, the Argentine Football Association’s delegate to its national teams. “The possibility of being able to analyse the performance of the players we’re training gives coaches an important tool to direct the team and the anticipated results.”