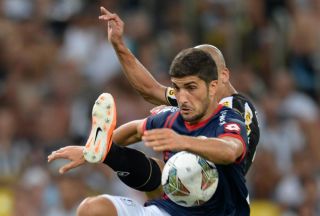 Substitute Nicolas Blandi scored a late brace for San Lorenzo as they came from behind to defeat Rosario Central 2-1 on Thursday.

Leaders of the Primera Division's Torneo Final - Colon - had been held to a 1-1 draw on Tuesday by Godoy Cruz, which gave Torneo Inicial champions San Lorenzo the chance to edge closer to the top of the standings.

After Rosario striker Carlos Luna had stunned the home crowd with a goal in the fourth minute, San Lorenzo looked to have wasted that chance.

But a 59th-minute red card to visiting defender Rafael Delgado gave San Lorenzo the upper hand and the hosts pulled off an impressive comeback when Blandi struck in the 85th and 88th minutes.

It got worse for Rosario as well with Hernan Encina sent off in the 90th minute.

Colon remain first in the table with 13 points but San Lorenzo (12) and Estudiantes (11) are both within striking distance, while Godoy Cruz, Belgrano and Velez Sarsfield (all 10) could draw level with the leaders over the weekend.

Newell's thumped Velez 4-1 on Wednesday to make it seven points from their past three games as the reigning Torneo Final champions rose to seventh position in the table.

The opening three rounds of the Torneo Final had seen Newell's fail to win but they have now moved to nine points after two wins and a draw in their past three matches.

Victor Figueroa was the key man for Newell's at the Estadio Marcelo Alberto Bielsa, setting up two goals and scoring the home side's fourth with an audacious chip.

Figueroa's corner in first-half stoppage time saw Gabriel Heinze open the scoring for Newell's, while Milton Casco made it 2-0 just after the break after playing a one-two with Ezequiel Ponce.

A brilliant passing move in the 55th minute saw Cristian Diaz score the hosts' third goal with Figueroa providing the decisive pass, chipping the ball over Velez's defence for his teammate to volley home.

Velez hit back with 11 minutes remaining through Roberto Nanni but Figueroa ensured Newell's finished the match on a high, chipping visiting goalkeeper Sebastian Sosa from inside his attacking half in the 88th minute.