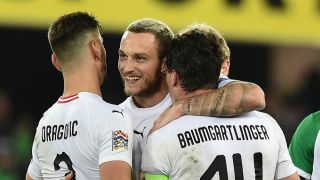 Marko Arnautovic refused to comment on his future at West Ham after coming off the bench to help Austria beat Northern Ireland 2-1 in the Nations League.

The Hammers forward has scored five goals in 10 Premier League matches this season, establishing himself as a key figure under Manuel Pellegrini.

Arnautovic's agent, his brother Daniel, suggested a number of clubs – including Chelsea and Everton – were interested in signing the 29-year-old in January, while he also indicated a return to Serie A could materialise.

After providing the assist for Valentino Lazaro's stoppage-time winner at Windsor Park, Arnautovic was not eager to discuss where his future lies but did hint there had been discussions.

"I don't want to talk about that," he said. "I concentrate on West Ham.

"We have a big game on Saturday against Manchester City and I think only on this game and the next games.

"What my agents and the clubs are talking [about] is not my business. My business is to perform on the pitch, that is what I want to do."