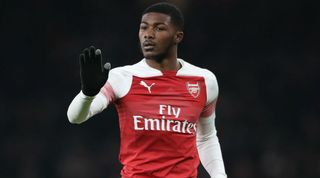 Arsenal threw away a two-goal lead to draw with Watford on Sunday, and the statistics made grim viewing for Emery and fans alike.

Two defensive errors led to Watford's goals, including a wayward pass from Sokratis Papastathopoulos as the Gunners tried to play out from the back.

Maitland-Niles has responded to the nature of the loss with a sense of regret that the players didn't take it upon themselves to change things.

"Words can’t describe how I feel about it," he told Sky Sports News (via the Metro).

"I don’t think [that the team was scared], I think we tried to play the way we played. We should have changed it instead of being so persistent and trying to play out from the back.

"We’ve spoken to each other as a team and the manager has also spoken to us.

"We know we’ve done wrong, we can all hold our hands up and blame each other if we wanted to, but we’re a team and we take the responsibility as a team to be better."