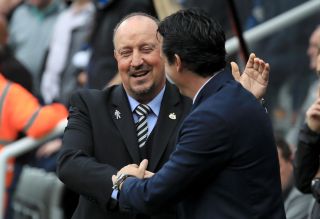 Unai Emery has hailed the “courageous” Rafael Benitez as his “reference point” in English football.

Emery’s Arsenal host Benitez’s Newcastle in the Premier League on Monday, at a time when the two Spanish managers are again being praised for their work.

Victory would give Arsenal a 10th successive home league win, equalling a run they last enjoyed in the 1997-98 season in Arsene Wenger’s first full campaign as manager.

Benitez, meanwhile, is on the brink of leading Newcastle close to safety despite the unsettled circumstances he has had to deal with.

In contrast to Emery’s first season in English football, Benitez has proven long-term success that includes six largely impressive years with Liverpool from 2004.

Emery said: “I respect him a lot because he is a very good coach and has a lot of experience and a lot of titles.

“Here in England he has more experience than me. It is a big reference for us, for me, as a coach, his work and his courage.”

RB: “Arsenal are doing really well. They are normally a team that likes to keep the ball and they have the quality to do it, but we know exactly what we have to do.” #NUFCpic.twitter.com/kMXkQed1rH— Newcastle United FC (@NUFC) March 29, 2019

With Arsenal firmly in the hunt for a top-four finish and Champions League football next season, Emery added: “Each match gives us the possibility to progress.

“First is in the table, second is improving as a team, in our system, tactically and individually. I want to be better each match, and I think each player can progress.

“Each player can show us he is improving. In the table, our objective is very clear – to be in the top four. But we know this is difficult and each possibility like Monday is good. It gives us confidence for the challenge.”

Emery is also demonstrating a similar level of tactical flexibility that has contributed to much of Benitez’s success.

Arsenal have proved convincing while playing with both three and four-strong defences, options that could prove crucial given Lucas Torreira’s absence through suspension.

Fellow central midfielders Granit Xhaka and Aaron Ramsey also face late fitness tests, even if the latter is expected to be available for selection.

“In the last two matches, we started with 3-4-1-2 but we finished playing 3-4-3. In 90 minutes we have different systems and different players.

“We need to continue doing that and maybe we can be consistent. The best possibility for us is for all the players to be ready to help us with a good mentality.”