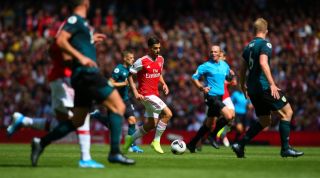 Ceballos was one of the star players of the Under-21 European Championships last summer as he played a starring role for winners Spain.

The 23-year-old attracted interest from a number of clubs, but it was Arsenal who ended up signing him on a year-long loan.

After a bright start at the Emirates, Ceballos has found it hard to impose himself in a struggling Arsenal side.

However, he is reportedly happy in London and feels the love from the supporters and his manager.

He cited a phone-call with Unai Emery as one of the main reasons for choosing to join the Gunners.

The same can't be said for Real Madrid coach Zinedine Zidane, who Ceballos is understood to have a rocky relationship with.

Zidane didn't put his faith in Ceballos when he rejoined as Los Blancos boss last season.

The Andalusian midfielder is believed to be keen to prove himself at a club that values him, hence his decision to part ways with Madrid.

Although Real Madrid have no obligation to sell Ceballos to Arsenal over any other club, the player himself is reported to have told Perez they are his preference.

Perez is not usually one to bargain with but according to the report, on this occasion, he may accept a lower fee.