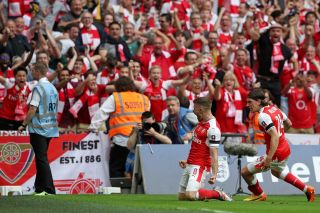 Wenger went into the Wembley showpiece with his future as Gunners boss still uncertain, with talks due imminently about whether he will sign a new contract at the club or depart after 21 years at the helm.

Failure to qualify for next season's Champions League has piled the pressure on the Frenchman in recent weeks, but Ramsey headed home substitute Olivier Giroud's cross in the 79th minute to defeat Premier League champions Chelsea, who had equalised only three minutes earlier through Diego Costa.

It was a second FA Cup final winner for Ramsey, who also gave the Gunners victory over Hull City in 2014, and a seventh FA Cup for Wenger - making him the most successful manager in the competition's history.

After a difficult campaign, Arsenal had gone into the game they hoped would save their season with a decidedly makeshift team. Defenders Laurent Koscielny (suspension), Shkodran Mustafi (concussion) and Gabriel (knee) all missed out so Wenger handed Per Mertesacker his first start of the season alongside Rob Holding and Nacho Monreal in a back three, while Alex Oxlade-Chamberlain occupied an unfamiliar left wing back role. David Ospina started in goal, with Petr Cech on the bench.

Chelsea had no such worries, able to name a full strength line-up as they attempted to add the FA Cup to the Premier League title. John Terry was an unused substitute in his final match before departing the club.

Antonio Conte's men went into the game as big favourites, but the Gunners were quickly on the front foot and were ahead in dramatic fashion after only three minutes and 49 seconds.

Alexis Sanchez blocked an attempted clearance from N'Golo Kante and the ball looped over the Chelsea defence, seemingly into the path of an offside Aaron Ramsey. The assistant referee swiftly flagged, but Ramsey stepped aside as Sanchez chased on to the loose ball and fired past Thibaut Courtois. As Arsenal protested, referee Anthony Taylor darted over to confer with the linesman and the goal was given, to Chelsea's anger - there were also question marks over whether Sanchez had originally blocked Kante's clearance with his arm.

Sanchez hasn't always hit top form this season but he was at his determined best here, charging around in trademark fashion and soon playing in Mesut Ozil, whose effort was cleared off the line by Gary Cahill.

Arsenal tails were well and truly up, commanding 70 per cent of the early possession, as Chelsea faced one of the most difficult moments of a largely serene campaign. But it shouldn't be forgotten that things started to go smoothly after a 3-0 loss at the Emirates in September, when the Gunners scored three times before the interval, and Conte's side were enduring real first-half problems again.

Chelsea could so easily have been two goals behind as Danny Welbeck headed an Ozil corner against the post. Ramsey could only strike the upright again with the rebound.

The Blues were not without a goal threat themselves, though, as Costa was denied by Ospina, with the game increasingly turning into an end-to-end thriller.

Ten-man Chelsea level, but not for long

Conte's men opened the second half in better fashion, with Ospina having to save from the rampaging Moses. But Arsenal seemed to have been given a huge boost in the 68th minute when Moses was shown a second yellow card for simulation, having appeared to go down easily under a challenge from Oxlade-Chamberlain inside the box.

Victor Moses is the fifth player to be sent off in an FA Cup final after Kevin Moran, Jose Antonio Reyes, Pablo Zabaleta and Chris Smalling

But Chelsea levelled just eight minutes later as substitute Willian crossed from the right and Costa chested the ball down before firing in an effort that took a slight deflection off Mertesacker before finding the corner.

As it turned out, they were only on level terms for two minutes. Wenger swiftly introduced Giroud, and Arsenal's sub had an instant impact. Seconds later he crossed from the left and Ramsey headed home.

Costa came close to equalising for a second time when his shot was kept out by Ospina, but Ozil hit the post at the other end as Arsenal emerged triumphant, lifting the FA Cup for a record 13th time.