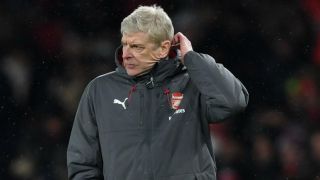 David Seaman understands the frustrations of Arsenal fans and believes displays like the 3-0 EFL Cup final loss to Manchester City demonstrate that his former club are "so far away" from the level of their rivals.

Arsene Wenger is under increasing pressure at the Emirates Stadium, with his team's chances of finishing in the Premier League's top four appearing remote.

However, the Gunners are in the last 16 of the Europa League – where a tie against AC Milan awaits – and success in that competition would secure a place in next season's Champions League.

Wenger's side were beaten 3-0 by City in the EFL Cup final and then lost to Pep Guardiola's team by the same scoreline in the Premier League.

Seaman said the performance at Wembley was an indication his former club are well behind the best.

He told Omnisport at the London Football Awards: "I know where people who are criticising Arsene are coming from.

"It's so frustrating, especially when you see, I was at the cup final, when you see that, it just makes us look so far away from the top teams now.

"OK, we don't always play that bad but it was just disappointing the way we didn't turn up for a massive game."

Sol Campbell, another Arsenal great, believes the frustration has built up at a club which last won the league title when he was still playing in 2004.

"Some of the results have been disappointing this season and I think it's just a compounding of the years [of disappointment]," he told Omnisport.

"It's always nice to win an FA Cup and things like that, it's great. I think it's just frustration.

"I don't think it was actually the League Cup [final performance], I think it was just a combination of year after year [of] not challenging for the Premier League.

"I think it's just frustration through that really."