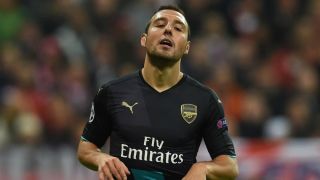 Arsenal playmaker Santi Cazorla says the team must change to win the Premier League title after yet another season of disappointment at Emirates Stadium.

The Gunners had one of their best chances in several years to claim their first championship since 2003-04, as holders Chelsea and traditional heavyweights Manchester United struggled throughout the campaign, with Manchester City also below their best.

Rather than seize the opportunity presented to them, Arsenal have had to watch as Leicester City defied expectations to climb to the top of the standings, with north London rivals Tottenham proving to be the Foxes' nearest challengers.

And Spanish attacking midfielder Cazorla, who has been linked with a transfer back to Villarreal, has acknowledged the squad's shortcomings as they prepare to end the campaign empty handed.

"We will see what we have to do, but I think we need to be more regular [consistent].

"This year we lost at home to Swansea, drew at home to Crystal Palace, and this is the difference if you want to win the league.

"It's true we have a great mentality and great philosophy, because we always want to attack and always want to score, but sometimes we need to be clever, and if we are winning 1-0 we need to protect this result and win the three points."

Some Arsenal supporters are planning to stage a protest directed against manager Arsene Wenger during the home match against Norwich City on Saturday.

Cazorla, though, insisted everyone connected with the playing squad, not just the manager, must accept a share of the blame for the team underachieving.

"We all have the responsibility this season," he said. "When we win we win together, when we lose we lose together, we are a team.

"We had a great opportunity, we know that and we were disappointed. But this is football, and we only look to the future.

"We know we had a great opportunity to win the league this year and the only thing now is to fight until the end for the final three games."