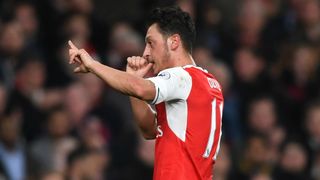 Mesut Ozil believes Arsenal are among the best clubs in the world and insists he is happy at Emirates Stadium.

Arsenal have not won the Premier League title since 2003-04 and some have suggested their lack of success could prompt stars such as Ozil to leave the club, with the Germany international's contract due to expire in June 2018.

Nevertheless, Ozil has dismissed suggestions he is unhappy at Arsenal, with a decision on his future in London forthcoming at the end of the season.

"Arsenal belong as one of the best clubs in the world and London is a great place to be, a great city to live in," Ozil told Sky Sports.

"As I have always said in the past, I feel comfortable here. I am happy.

"As I have said before, in the summer we will talk but right now Arsenal stands in front of any player and I respect that.

"So after the season we will talk and then we will make a decision from there."

Ozil has received his fair share of criticism this season after yet another year without Premier League and Champions League success, but the former Real Madrid man remains unperturbed by what others say.

"The expectations are always high, which I guess is normally a positive, you could say," the midfielder added.

"For me what is most important, as I have always said, is the manager's opinion, because when it comes from him you know it's the truth, be it positive or be it negative.

"There are some people that like me and some people that do not, but I give no worth to those opinions, really. They can have them, but I know what I can do. My stats show that I do give my all and I give my best."