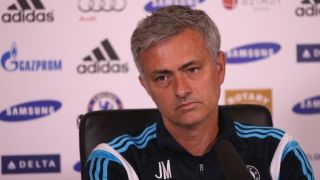 Leaders Chelsea visit Arsenal in the Premier League on Sunday, with manager Jose Mourinho not focusing on extending his unbeaten record against counterpart Arsene Wenger.

Mourinho has enjoyed dominance in this fixture thanks to an undefeated streak stretching back 12 matches across various competitions.

This weekend's meeting at the Emirates Stadium affords Chelsea the chance to move one step closer to a fourth Premier League title - victory against Arsenal followed by three more points at Leicester City on Wednesday will see them secure the trophy with four games to spare.

The relationship between the two managers has been fractious in the past, with Wenger shoving Mourinho during the reverse fixture in October, but the Chelsea boss has played down any suggestions of ill feeling.

"For me he is not my rival, I don't feel that. I just feel he's the manager of a big club in the same city where I work and live," the Portuguese said.

"We're big clubs with the same objectives and because of that there will always come a little bit of rivalry but for me it's no different to when I was at Inter with the Milan managers or in Real [Madrid] with the Atletico managers.

"I'm not proud [of his record over Wenger], for me an achievement is to win [on Sunday], not the other 12 matches that we played before against Arsenal, I don't look to this.

"Every match is a match, no relation to the previous or the next one, what they [the players] care about is the way we work all week and the way we prepare ourselves for the game."

Mourinho confirmed that Didier Drogba is fit to play after an ankle problem, although Diego Costa (hamstring) and Loic Remy (calf) remain doubts, with academy player Dominic Solanke potentially in line for a Premier League debut.

Cesc Fabregas is set to make his first return to the Emirates Stadium since departing for Barcelona in 2011, but Mourinho is not concerned about the midfielder receiving a hostile reception, while Wenger has called on Arsenal fans to respect the Spain international.

If Wenger is to break his duck against Mourinho, Sunday might represent his best opportunity for some time, with Arsenal coming into the clash on the back of eight consecutive league victories.

Second-placed Arsenal are 10 points behind Chelsea, but Wenger remains confident his side can close that gap.

"When you are fighting for the championship - and I know that well - when you are on a good run, sometimes you take points that in another season if you were two or three places behind, you would not take," he said.

"The focus and belief is there and is a bit stronger that we can take these points. The difference between the teams is not only measured by the difference in points.

"But nobody has given Chelsea the points. They had to fight for it and they made it."

Wenger described defender Per Mertesacker as "50-50" for this game with an ankle problem, with Gabriel Paulista set to deputise, while Alex Oxlade-Chamberlain (hamstring) and Mikel Arteta's lack of match fitness means they remain absent.